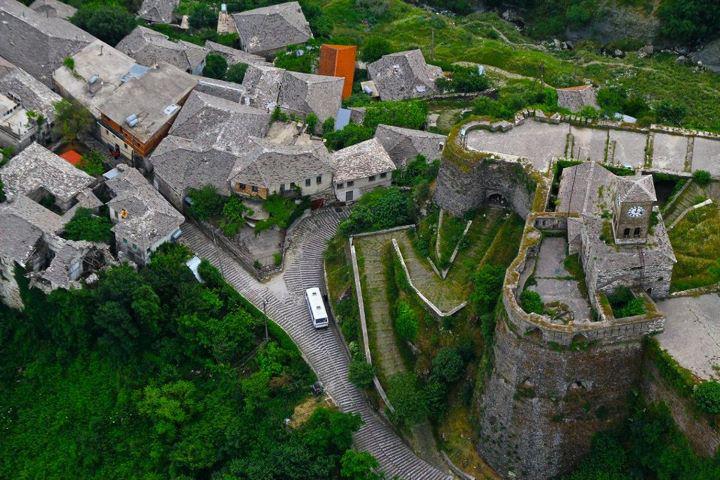 By Edward Reeves – The Telegraph

This is odd. I’m sitting in a bar in Tirana, Albania, and there’s not a gangster in sight. What there is is a 20ft-long counter packed with an array of enticing meats, a friendly man who grills them on request, and beer at 70p a glass. Everyone speaks English, and everyone is unfailingly nice. Could it be that there’s a mismatch between Albania’s reputation for – how to put this politely? – unconventional economic activity, and the modern-day reality? After a week travelling the country with my mother, without so much of a whiff of trouble or a gangster’s cheap cologne, I’d say the answer is a resounding yes.

In fact, our Albanian trip has turned us both into bores when it comes to this oft-ignored Mediterranean country’s virtues as a tourist destination. For those of you with a short attention span, the upshot of this article is “Go!” But first some context. Our trip came about when I read that tour operator, Voyages Jules Verne (VJV), was returning to the country after a 20-year absence. Back in the late Eighties a VJV trip was the only way to visit Albania, which was ruled by a paranoid communist dictatorship that issued a few hundred visas each year. My intrepid, left-leaning mother went not once, but twice, in 1986 and 1987, flying into Titograd in the former Yugoslavia (now Podgorica, capital of Montenegro) and crossing the border at 3am under searchlights, as wolves howled in the distance. All books, magazines and other printed matter were confiscated by Kalashnikov-wielding guards and visitors had to walk through a sheep dip to kill capitalist germs. Welcome to Albania.

How times change. We fly direct into Tirana to begin VJV’s new “Classical Tour of Albania” itinerary – and there’s not a sheep dip in sight. The airport is clean and modern, with an even cleaner and more modern tour bus waiting 100 yards from the exit. Our guide, Elton Caushi, could be mistaken for an Italian art student. Young people, he says, acutely aware of Albania’s reputation abroad, now avoid the dark, hired-killer look that was thought to be cool in the Nineties. There’s no hanging about – VJV’s bumpf makes it clear that Albania’s geography and poor road network dictate long coach journeys (and warns there’s a fair degree of walking). First stop is the 18th-century monastery of Ardenica, sitting on a hill that the communist regime burrowed into and covered in bunkers and gun emplacements (Albania is peppered with bunkers – there are thought to be more than 700,000 of them). My mother didn’t visit Ardenica on her previous trips – back then the church was used as a storeroom for military kit. The survival of its splendid iconostasis and frescoes, by two of Albania’s finest icon painters, the brothers Konstandin and Athanas Zografi, is something of a miracle.

We spend the night at the town of Fier which, for the record, smells of petrol (it’s near a refinery) and has nothing to offer even the most rosy-spectacled visitor. It’s convenient, however, for the ruined city of Apollonia, which we visit the following morning. Truth be told, its most famous resident, Augustus, would be hard-pushed to recognise it. But we have high hopes for our next historical site, Butrint, scheduled for the following morning. Trouble is, Butrint is far to the south, close to the Greek border. This means a day driving the Albanian Riviera, to Saranda, where we’ll stay two nights. And it’s a long drive – close on eight hours – but with stops for lunch to enjoy the view from the Llogaraja Pass and the fort built by Ali Pasha (of Byron fame) at Palermo Bay.

Scenery aside, the major point of interest is olive trees planted on a hillside to spell the name of Albania’s unlamented dictator Enver Hoxha. My mother remembers the hills being festooned with such slogans, in white-painted stones. It was a way of imposing control, Elton explains – trusted communists might be ordered to paint “Enver”; the politically suspect would get phrases such as “United States Capitalist Imperialism is a Paper Tiger”, which could take months. My mother looks crestfallen. “I assumed they were painted by grateful villagers,” she says. Butrint, we discover, is a magical site. In Italy it would be packed with visitors; we share it with a single coachload of elderly Germans. The ruins are spread over a small peninsula, and range from the fourth century BC through to the early 1900s (Ali Pasha had a hunting lodge here), via the Byzantine era. Terrapins sunbathe in the flooded theatre and bathhouse, crickets chirrup and eucalyptus leaves rustle gently in the breeze. All in all it’s a very satisfactory place to spend a morning.

Next day we drive a couple of hours inland to the town of Gjirokastra. This Unesco World Heritage Site is utterly charming, with steep cobbled streets, crumbling Ottoman houses and a spooky castle. This is closer to the Albania my mother remembers, though with the addition of a small capitalist economy of craftsmen selling wood and stone carvings, and an eccentric shack of a restaurant, Kujtimi, where she’s able to tuck into (delicious) frogs’ legs. It’s worth mentioning that Albanian cuisine is generally good quality, and refreshingly cheap. Food had been an issue on my mother’s last visit – in the Adriatic “resort” of Dürres her half-starved tour group had found just one café, which had to be opened specially by an aged crone who clearly believed everything the Hoxha regime told her about sulphurous Westerners. The menu had the advantage of simplicity: brown bread, served with a snarl.

After a night in Gjirokastra we embark on a second long drive, north to the town of Berati. This turns out to be another old-world charmer, with more tumbledown Ottoman houses piled either side of a river, and a beautifully preserved citadel with a glorious church, St Mary’s, which is now a museum boasting some extraordinary frescoes. If you harbour ambitions of leaving the rat race and opening a boutique hotel, Berati is the place to do it. We pause en route to view the Roman ruins at Bylis (impressive) and for a snack in Fier (less impressive).

Final stop is Tirana, the capital, which turns out to be a friendly, buzzing place. There’s too much to see and do in our short stay, which includes a day trip to nearby Kruja, the fortified town from which Albania’s national hero Skanderbeg led the 15th-century resistance against the Turks. Enver Hoxha’s daughter herself restored the castle and turned it into a shrine to Albanian nationalism. The big change, my mother says, is the cobbled bazaar, which was firmly shut on her last visit (back then VJV recommended £5 spending money for the entire week; all visitors could buy were translations of Hoxha’s various masterworks). The bazaar is now piled high with communist detritus.
That night, in Tirana, we wander around Blloku, the old residential area for the nomenclature. Until communism fell, it was out of bounds to ordinary Albanians. Now it’s packed with bars, cafés and fashionable young people having fun.
My mother is flabbergasted. Tirana in the mid-Eighties had been utterly dead. The only excitement came when an overweight man in brown flares and a garish rainbow-stripe jumper propositioned her in the loos of the Tirana International Hotel. She fought him off, and he was arrested in minutes. She has no doubt he was sent to a prison camp, or worse. My mother proclaims she’s going to come back and explore the north of the country, solo, at a more leisurely pace. She’s sad that the socialist experiment failed, but her opinion of Albania – and Albanians – has changed completely.

“I used to think they were a dour, unsmiling bunch,” she says, “but now they’re all so friendly.” Funny that.