On the Albanian Riviera, a Frugal Paradise

Home / Company News / On the Albanian Riviera, a Frugal Paradise 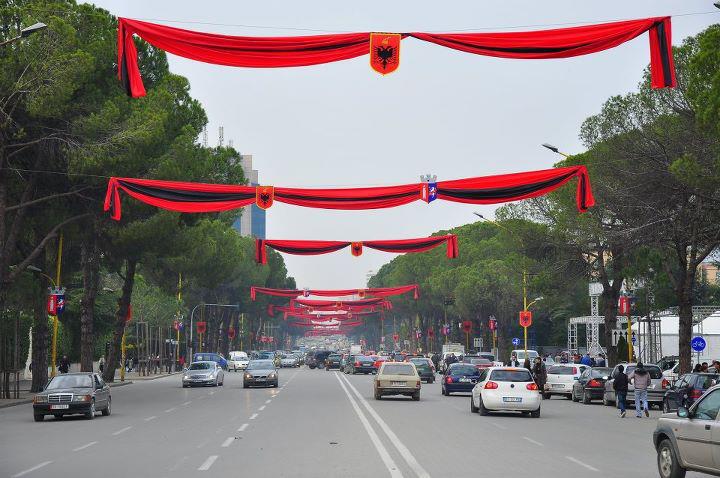 On the Albanian Riviera, a Frugal Paradise

Just past the tiny village of Ilias, on the two-lane highway that weaves through the Ceraunian Mountains, a sign pointing down a narrow road indicated a monastery about two kilometers on.

”Why not?” I thought, putting on the turn signal of my rental car. I had no agenda other than to seek out adventure along the very affordable 80-mile stretch of beaches and villages between the cities of Vlore and Sarande, an area known as the Albanian Riviera.

But the road ended at a hilltop house where an old woman dressed in black stared at me quizzically.

”Monastiri?” I said in a hapless attempt at an Albanian accent in what I later discovered was a largely Greek-speaking region.

She pointed in the direction of the way I had come and seemed to signal that I had missed a turn. Back toward the main road, I found a severely rutted turnoff, grabbed a camera and sunglasses from the car, and started hiking. Travel fantasy mode kicked in. Would the monks invite me to dinner? Let me stay on a cot for the next few days if I did chores? Ask my opinion about their latest batch of ale?

They would not, because there was no monastery at the end of that road either. Instead, there was an idyllic pebbly beach where an otherwise inaccessible canyon opened up to the deep blue Ionian sea. There was not a soul in sight.

Near the beach were a number of mushroom-shaped bunkers that the isolationist dictator Enver Hoxha, who died in 1985, installed across the country to defend it against a foreign attack that never came. There were more recent artifacts too: a newspaper horoscope page dated a few days earlier and plenty of soda and beer bottles that indicated the beach had been used much more recently for purposes other than defense.

But today, I thought to myself, it’s all mine. With my bathing suit back in the car, I stripped naked and dived into crystal blue waters, registering the scene in my internal archive of top travel moments. It was only as I came out of the water that I spotted two sunburned Austrian tourists hidden under a rock outcropping reading paperbacks, or pretending to as they laughed at me. (I went over to chat with them, pretending nothing was out of the ordinary.)

O.K., the Austrians had slightly sullied my afternoon at Gjipe Beach, as I later found out it was called. But at least in budget terms, Albania was surely the best stretch of the six-week-old Frugal Mediterranean adventure. For the first time, 500 euros a week easily paid for everything I wanted, starting with a confusing but not torturous seven-leg bus ride from Dubrovnik, Croatia, just 300 miles away. (Short of hiring taxis, I can’t figure out a more efficient way to do it, and despite language barriers drivers were thoughtful in making sure I got to the next bus.) I also rented a car for four days and private rooms from local families every night. I ate huge restaurant meals topping out at around 8 euros, and guzzled espressos and spring waters at beachfront cafes with glorious views. Still, I didn’t even come close to hitting my budget. (Though it would have been a bit tougher in July or August, when many rooms cost more.)

For most travelers the starting point of the Albanian Riviera is Vlore, a somewhat tacky city with lots of outdoor cafes that have fancy cushions but too much mindless club music; the cluttered, unattractive coastline has mediocre if bustling hard-sand beaches. There’s a certain amount of chaos in Vlore – virtually no signs giving street names, nutty drivers, ugly and seemingly stalled concrete construction projects. But that’s not really surprising in a country that’s still one of the poorest in Europe and only a quarter century removed from the Communist dictatorship of Hoxha. If Albania no longer feels isolated or scary, it still seems to be finding its way.

There were two highlights in Vlore: a park along the main drag, Bulevardi Vlore-Skele, where old men smoked like chimneys around intensely contested games of chess and dominoes and warmly welcomed a visitor with a camera.

And then there was the Museum of Independence, in the two-story house where Ismail Qemali ruled as the first prime minister after the country gained independence from the Ottoman Empire in 1912. As the lone visitor that afternoon I was rewarded with a personal tour by the director, Ilia Cano, who made a valiant attempt to explain the history in poor English mixed with French. (He also let me sit at Qemali’s desk and pretend to sign documents with his quill pen.)

I stayed in Vlore on the first and last nights of the week, but the trip’s real payoff came in the string of small towns that start once you drive up and over the perilously steep and forest-lined roads of Llogara National Park. After asking around about prices of hotels and private rooms in a few towns, I chose Himare as my base. A young man named Simos whose family runs the Internet cafe offered me a large apartment attached to his house, practically in the center of town, for 20 euros a night. (The Albanian currency is actually the lek, at 142 leke per euro or 96 per dollar, but lodging and car rental are often quoted in euros.) Himare didn’t have the best beaches, but it impressed me with cafes overlooking the water and souvlaki stands galore. And it won my heart forever when I spotted a man leading a donkey through town, trying to unload two baaing baby goats slung over its back to the highest bidder.

My favorite place in town was the family-run Greek restaurant Taverna Viron. I had three dinners there, attended by Amalia, the English-speaking 15-year-old daughter of the owners, who was very sweet but not so helpful in helping pick the from the menu. Everything, she said, was ”so delicious.”

Then again, she was right: pork chops with tzatziki and potatoes, shrimp saganaki (tiny shrimp in a tomato-based, feta-heavy and Tabasco-spiked sauce), and whole grilled fish were all, indeed, quite delicious.

I ate alone but often chatted with interesting groups, from an Albanian-American family from Pelham Parkway in the Bronx to Amalia’s male cousins who invited me over to drink rakia, a liquor distilled from grape pomace.

Though Albania is known for its historic and archaeological treasures like the ancient city of Butrint, this particular stretch of coast has few. But I loved Himare Castle, a medieval site on the northern edge of town across the street and up the hill from the Alpet gas station. Don’t even think of looking for signs, either directing you to the ruins or telling you what they are. But in lieu of actual information, you can play amateur archaeologist, as in: ”This must have been an oven. Or a child’s bedroom.”

Though that first trip to Gjipe Beach was fun, I soon switched loyalties to Jali Beach, three miles downhill from the main highway. The beach, lined with umbrellas for rent, is very family-friendly; I’d estimate a running toddler is swept up in a grandparent’s arms approximately once a minute. And the shallow water is a shade of electric blue that designers of mint gum packaging only wish they could emulate.

I was hooked on Jali not for the beach, though, but for the instant friends I made at Taverna Peshkatari, one of several informal beachside restaurants specializing in seafood. (Peshkatari means fisherman in Albanian.) I usually ask for the menu before sitting down, to scout out prices and size up the friendliness of the staff. The guys at Taverna Peshkatari were friendly: they immediately brought a bucket of fish from the kitchen, noting that the owner had caught them all this morning.

I hear these claims all the time, so I shot them a dubious look. ”Tomorrow, come fishing and you’ll see,” said a young blue-eyed man in passable English. ”Be here at 6 a.m.”

This is what we in the frugal travel business call a ka-ching moment. Free boat trip! Local friends for the making! ”When I was fishing in Albania” stories for back home! The next morning I arrived at 5:55 a.m. to find that I had beat the young man, Jorgo Andoni, who turned out to be the owner of Taverna Peshkatari. But three older guys who recognized me from the day before were there drinking espresso and rakia. They invited me to join them. Hey, a 6 a.m. shot of liquor to start the day? Why not, I’m on vacation.

Soon after I was out on the water with Jorgo and his two fishing assistants – Geni Pirra and Eljon Likmeter – reeling in the nets they had laid the previous afternoon just off the rocky coast and watching them untangle their catch: merluza, cuttlefish, shrimp, even a flying fish.

Round about Net 4, Eljon and I abandoned work and dived into the water, swimming over to a tiny sand-lined cove carved into the rocks. I took another mental snapshot to file under Travel Memories – Best Ever. And, this time, no sunburned Austrians to ruin the moment.